Here you can find a summary of all the main milestones, political achievements, and awards we have obtained at the European level.

2002: drafting of the European Charter of Patients’ Rights which has become a reference for EU citizens’ healthcare rights. The majority of these rights were also embodied within the Council conclusions on Common values and principles in EU Health Systems adopted in June 2006.
To date, the European Charter of Patients’ Rights continues to be a milestone all over Europe and beyond for all those committed to advocacy activities on patients’ rights. Testifying this are its versions translated in 22 different languages, which act as an empowerment, informative, evaluation, monitoring, and legal instrument. 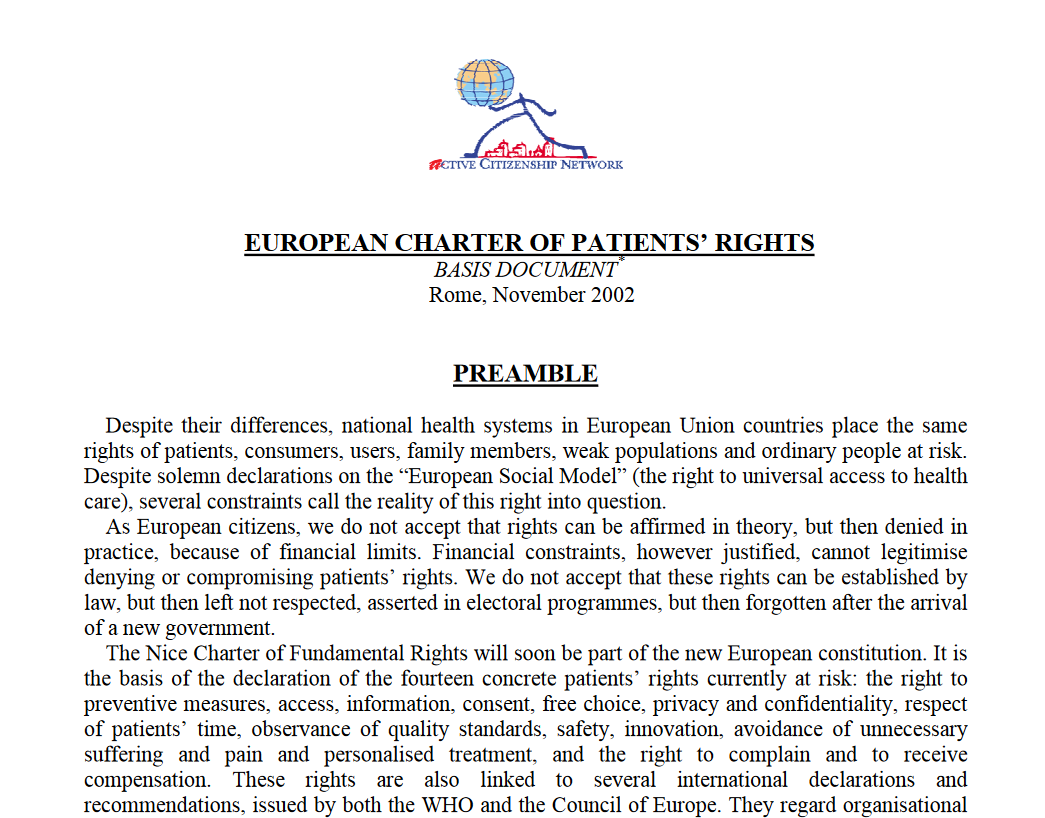 2005-2006: drafting of the European Charter of Active Citizenship, in collaboration with FONDACA, to bridge the gap existing in the EU about the rights, duties, powers and responsibilities of civic organizations acting in the public policies.

Also at the national level, thanks to the work of the constituency of ACN, the Charter has received endorsement as, for example, the Maltese government, which has widely recognized the rights included in the EU Charter and adopted them through the HEALTH ACT 2013 (Part VIII, Patients’ Rights and Safety) or the Italian Ministry of Health that has officially recognized the right to avoid unnecessary suffering and pain stated in the Charter, implementing the law no. 38 (15 March 2010) “Dispositions to protect access to palliative care and pain therapy”. To read more, click here.

Since 2007: launching of the European Patients’ Rights Day, celebrated every year on the 18th of April with local, national and EU events. Nowadays, the European Patients’ Rights Day has become a regular annual event recognized by the national and European political agendas to inform, discuss and take commitments to improve patients’ rights in Europe and in each Member State. Every year, also thanks to the more than one hundred patient and civic associations of our network, the EPRD is celebrated in hundreds of cities and ways all around Europe, allowing civil society to fully enter policy making processes and achieve important objectives. To know more about the European celebrations led by ACN, click here. To know more about some examples of local celebrations across Europe, click here. 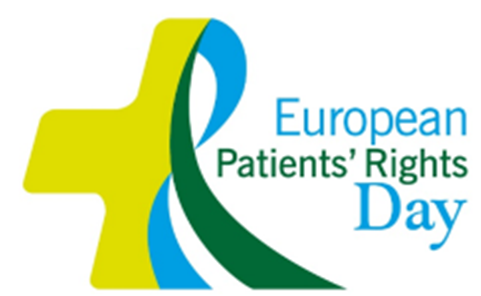 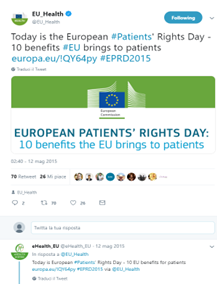 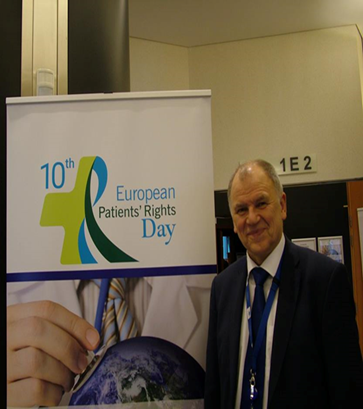 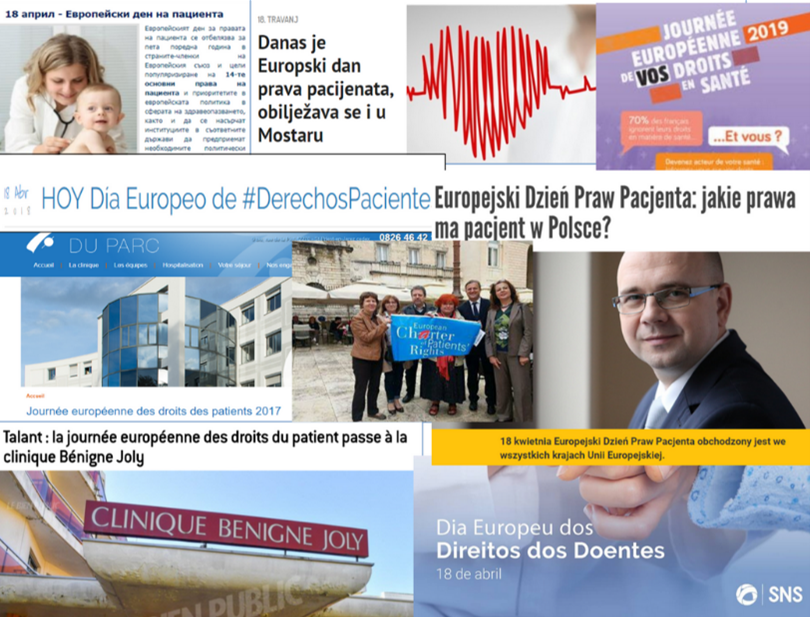 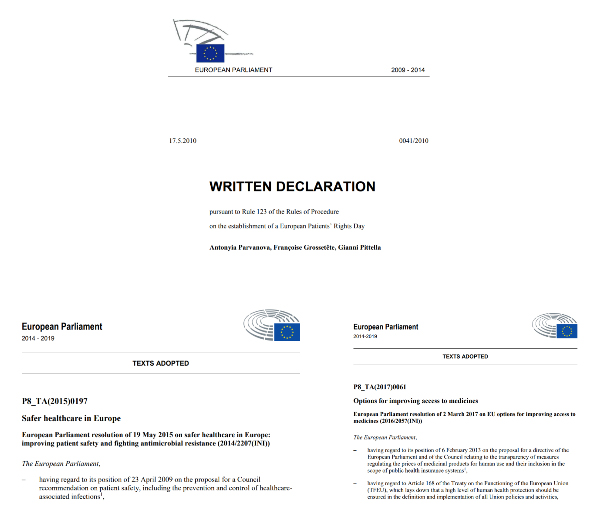 2007: awarded the Civil Society Prize of the European Economic and Social Committee for its work on citizens’ rights. To know more, click here. To download the press article, click here. 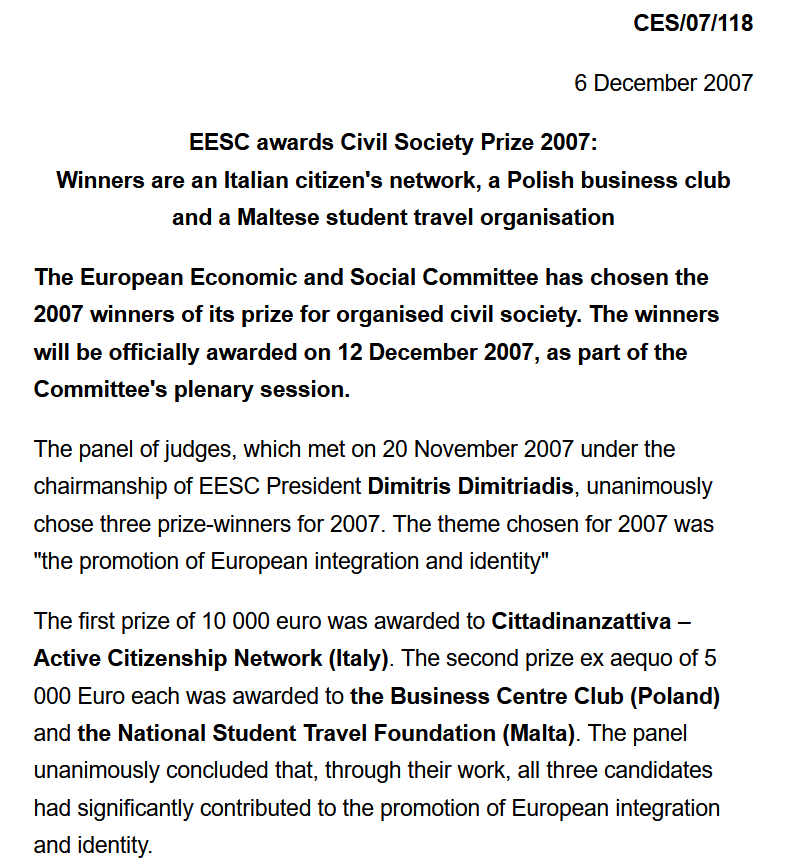 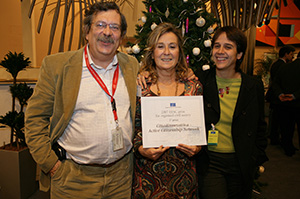 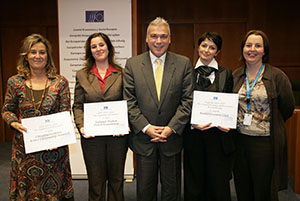 2009-2012: in Colombia, technical advisor to the United Nation Development Programme for the development of activities in the field of civic participation.

2011: drafting of the First Charter of Patients’ Rights in Colombia. To know more, click here. 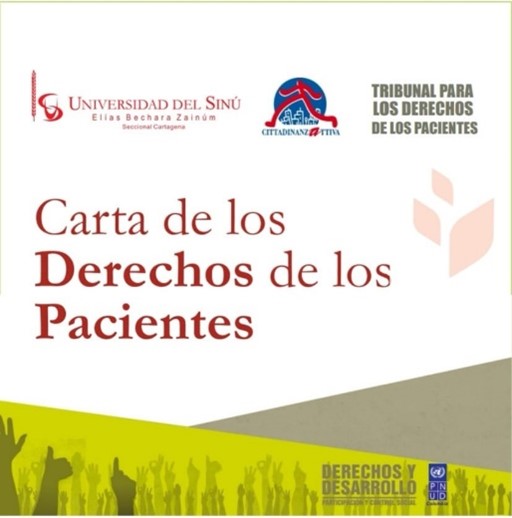 Since 2015: conceived, promoted and managed the Member of European Parliament Interest Group “European Patients' Rights & Cross-Border Healthcare” with the support of almost 100 associations from all over Europe and the direct involvement of many MEPs coming from different political parties and Member States. The Interest Group is the only experience of its kind to have been endorsed as co-chairs by 2 chairmen of the 8 political groups in the European Parliament during its first mandate (2015-2019).

Over the years, the Interest Group has promoted initiatives that have allowed us to have an impact in some public policies with a European scope and has represented a fast lane to bring to the attention of policy makers at the European level the demands of civil society aimed at strengthening the protection of rights and reducing inequalities, through multi-stakeholder collaboration and the protagonism of local communities, which in this context are represented by the many local organizations, far from Brussels, and which Cittadinanzattiva, through its Active Citizenship Network (ACN), succeeds in involving in the European public debate by accrediting them and giving them the opportunity to make the goodness of their work known to an audience outside the nation in which they are engaged. This, of course, is in line with our vocation to promote the widest civic participation in public policy making. Lastly, a third feature making the Interest Group unique regards its imitation and reproduction by numerous organizations focused on topics such as health, and not only. 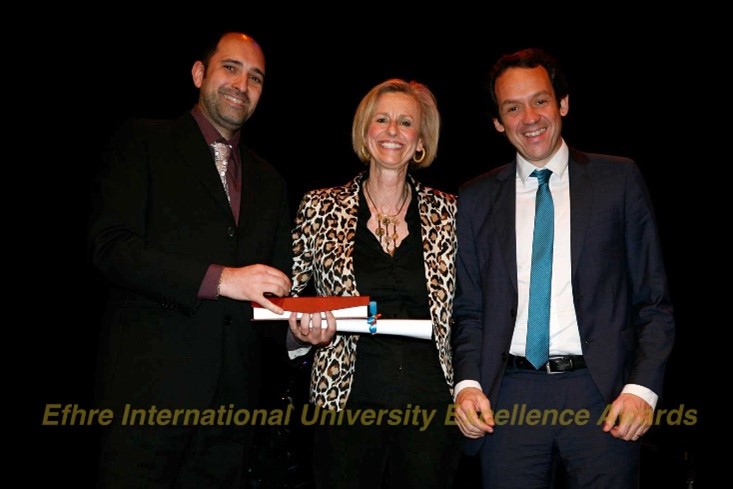 Since 2017: regarding EU consumer policies, we have obtained:

that a new European consumer association, European Consumer Union, in which we invested by growing it to 26 Associations from 17 countries, was formally invited to participate in the new Consumer Policy Advisory Group set up in early March 2021 at the European Commission.

the participation of individual national consumer associations in consortia for European H2020 projects having to do with consumer issues.

Since 2017: regarding vaccination policies, we have accredited the civil society as a fundamental actor in supporting European institutions on the topic. In particular:

Since 2017, we were officially involved in the ECDC Technical Advisory Group, led by the European Centre for Disease Prevention and Control (ECDC), the independent agency of the European Union with the aim of strengthening the defenses of EU member countries against infectious diseases. Cittadinanzattiva - through its EU branch Active Citizenship Network - is the only civic organization at EU level officially involved in the ECDC Technical Advisory Group, dealing with increasing vaccine coverage and contributing extensively to the recognition of the civic point of view in the development of public vaccination policies. 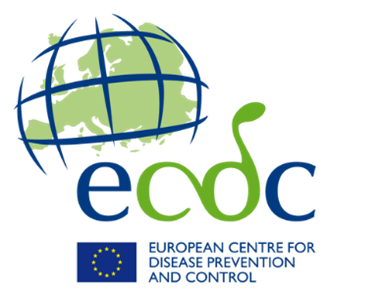 Since 2018, we succeeded in expanding the membership of the “Coalition for Vaccination” promoted by the European Commission, originally designed to involve only health professionals and medical students, now also open to the instances represented by civil society actors committed to the issue, with ACN in the lead.

2019: promoted by the Irish Patients’ Association, the Secretary General of Cittadinanzattiva was awarded, on May 14, 2019 in Dublin, with the International Irish Patients Award for his work on citizens’ engagement and for its EU Charter of Patients’ Rights. Read the programme of the initiative and listen a radio-interview of Gaudioso. 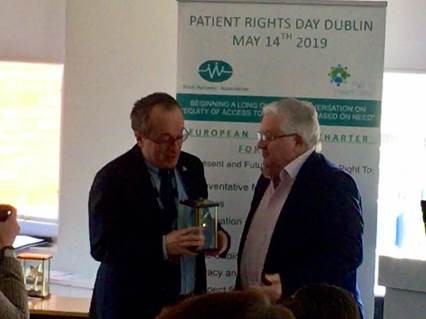 Antonio Gaudioso together with Stephen A. McMahon, Co-founder and Director of the Irish Patients Association

Since 2020: we managed to promote and empower a strong civic point of view also in different international peer-reviewed journals through the publication of numerous articles, testifying the growing interest of the scientific community in our work and more in general on the citizens’ engagement in public policies. 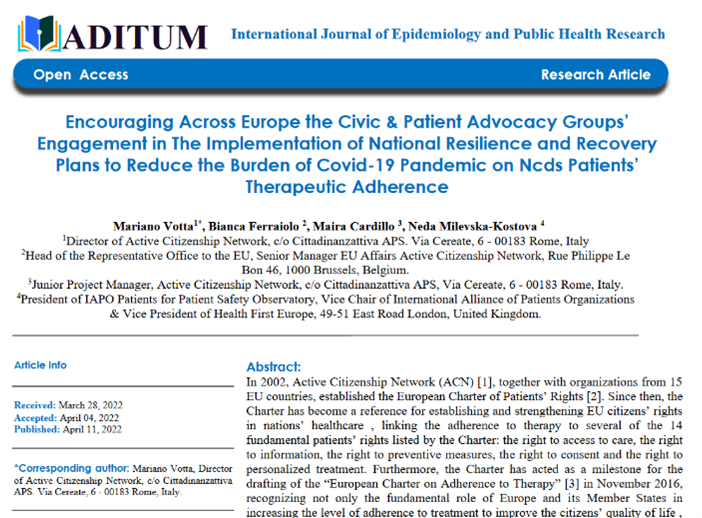 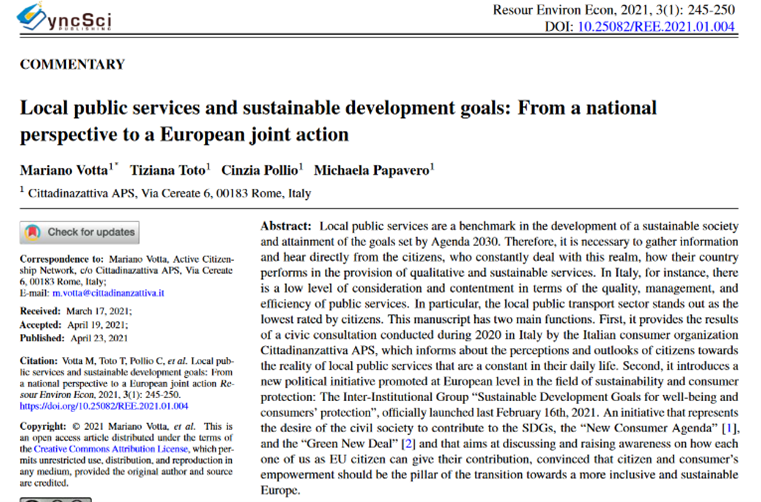 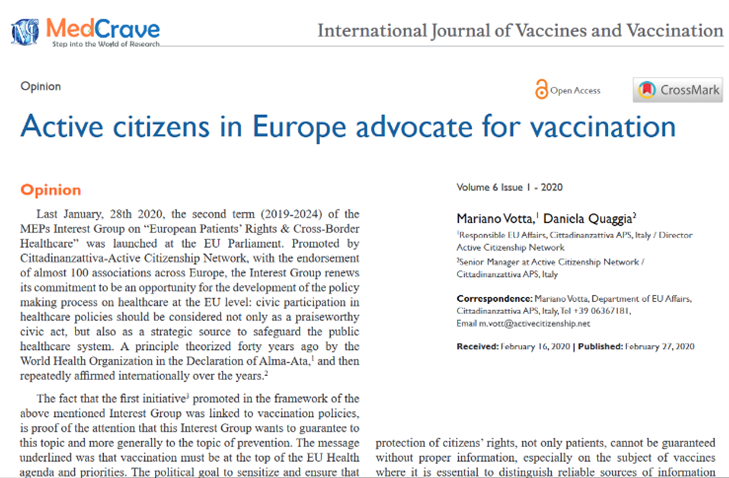 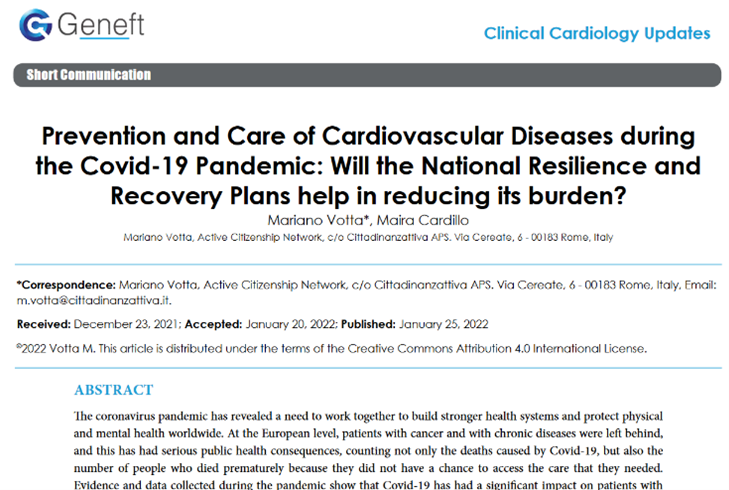 Since 2021: conceived, co-sponsored and managed the Inter-Institutional Group “SDGs For Well-Being and Consumers’ Protection. Inaugurated on February 16, 2021, the political initiative is promoted by Active Citizenship Network (ACN), the EU branch of the NGO Cittadinanzattiva, the European umbrella association European Consumers Union (ECU) and the coalition Italian Alliance for Sustainable Development (ASviS). The Inter-Institutional Group represents the desire of the civil society to contribute to the SDGs and the Green New Deal, aiming to discuss and raise awareness on how the individual, as a consumer, can give her/his contribution.

The initiative is already endorsed by the “SDGs Multi-Stakeholders Network”, that counts many National and European Associations, and is in line with the European Commission's initiatives as the "New Consumer Agenda" and the "Consumer Day”, organized by the DG for Justice and Consumers, titled: "Consumer policy in the service of the Sustainable Development Goals and the 2030 Agenda".

Overall, the initiative represents a fast lane to bring to the attention of policy makers at the European level the demands of civil society aimed at strengthening the protection of rights and reducing inequalities, through multi-stakeholder collaboration and the protagonism of local communities, which in this context are represented by the many local organizations, far from Brussels, and which Active Citizenship Network succeeds in involving in the European public debate by accrediting them and giving them the opportunity to make the goodness of their work known to an audience outside the nation in which they are engaged. This, of course, is in line with our vocation to promote the widest civic participation in public policy making.

2022: regarding cross-border healthcare and the desire of achieving a European Health Union, the newly formed European Health Emergency Preparedness and Response Authority (HERA) has decided to invite civil society representatives to join the civil society forum. In January 2021, ACN had expressed its position on the issue in the public consultation entitled "Serious cross-border health threats - stricter and more comprehensive standards", pointing out to the total absence of civil society involvement and providing ad hoc proposals. This opening responds in fact to our request.